Until 1973 Thayer's Gull was officially considered a subspecies of Herring Gull. Despite its likely cospecificity with Kumlien's/Iceland - in the field it is typically more difficult to differentiate Thayer's Gull from Herring Gull. In the typical scenario in Ontario you will be trying to pick out the one or two Thayer's in a large group (often 1000s) of Herring Gulls. Although with practice this becomes second nature there are some very useful field marks to help guide the process. 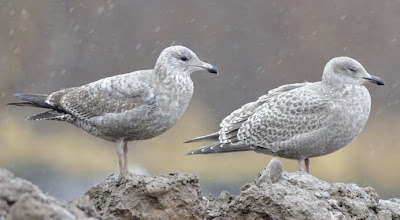 One of the best differentiating features between these two taxa is seldom mentioned in the field guides and is prerequisite on understanding the differences in their molt sequences.

I will  briefly review the concept of juvenal vs. immature plumage. Juvenal plumage is the first plumage a bird acquires after the downy nestling stage. A bird in juvenal plumage can be referred to as a juvenal or a juvenile. Immature plumage could refer to any of the multiple plumages a gull acquires between birth and full adulthood. It is a very imprecise term and really has no place in gull identification. 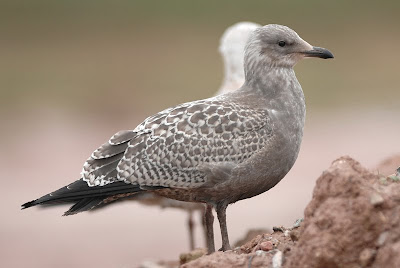 Fresh juvenal plumage is readily distinguishable in most gull species as the scapular and mantle feathers are large and have a scaly appearance while the wing coverts have a checkered look. This is illustrated well in the above picture. Herring Gulls typically undergo a partial molt in the fall replacing mantle and scapular feathers while retaining the juvenal wing coverts and tertials. This results in what is commonly referred to as first winter plumage. The pictures below show a juvenile bird molting into first winter plumage with the close up showing both large brown centred juvenal scapulars and the smaller mostly lighter replacement feathers. 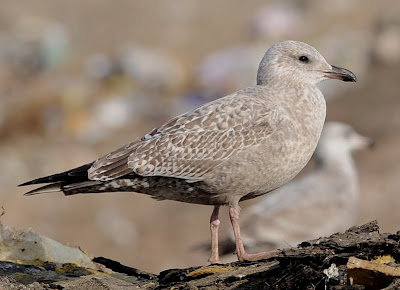 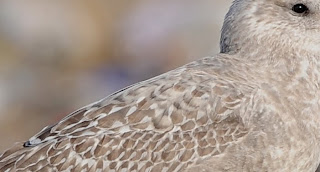 By late October the overwhelming majority (but not all) of the Herring Gulls will be in first winter plumage. Thayer's Gulls retain their juvenal plumage almost universally over the fall and winter months generally undergoing a complete molt in the spring. Thus recognizining the juvenal plumaged birds in a large flock allows the observer to rule out the vast majority of Herring Gulls and narrow down the field to a much more manageable number. With practice the scaly, checkered appearance with very uniform coloration stands out and is easily discerned when scanning a large number of gulls. 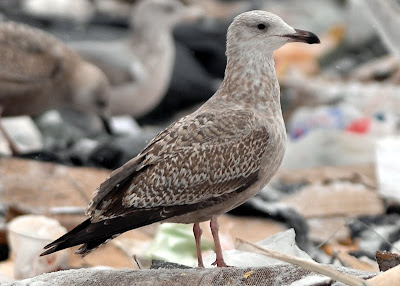 As aforementioned the first winter Herring Gulls replace their scapular and mantle feathers often producing a significant contrast in coloration with the retained wing coverts.   The Thayer's Gull in juvenile plumage will appear very uniform in color. 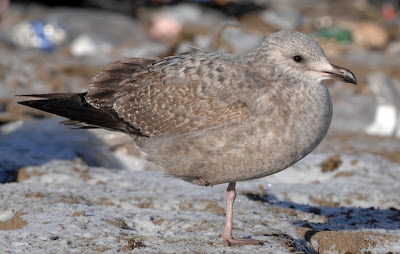 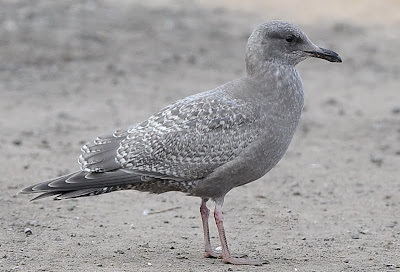 Structure is a helpful but tremendously variable feature in these gulls with significant overlap of all features. Thayer's Gull certainly has a tendency towards having finer features with a proportionately smaller bill and rounder dove like head. Overall size is not a helpful feature in my experience 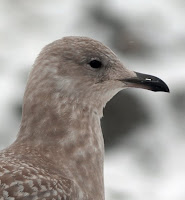 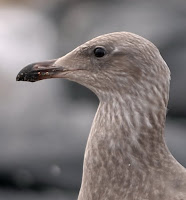 When I am scanning a large flock of gulls I will usually take a second look at the birds with rounded heads and smaller bills. These birds do stand out nicely. Many of these birds will end up being female Herring Gulls but some will be Thayer's. This is a feature that suggests you should take a closer look but is not diagnostic in of itself. The juvenile Thayer's Gull used to illustrate uniform coloration above shows a rather "Herring Gull"-like head shape although the bill is relatively petite. The juvenile molting into first winter Herring Gull illustrated above conversely shows a rather rounded "Thayer's Gull"-like head with a relatively hefty bill. Below is a very "Thayerish" Herring Gull - juvenile plumage, small bill, round "dove-like"head, but the dark blackish primaries give away the true identity- a female Herring Gull. 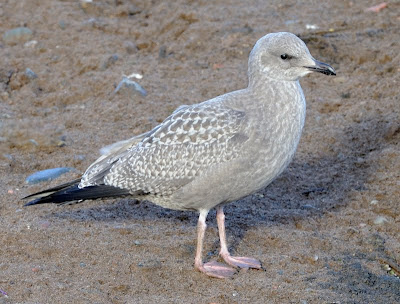 The particulars of the primary flight feathers are of great importance in the differentiation of  Thayer's from Herring Gull.. There is certainly some variation in this feature especially among Herring Gulls but if anything there is only minimal overlap. In the "wings closed" postion the primary tips of the Thayer's are typically a brownish-tan color with uniform coloration. The outer edges of the primary tips show a whitish edging forming an outer chevron pattern. The Herring Gull typically has blackish-brown primary tips (in the fall may fade to brown-tan by spring) they may have some white edging to the very tips but rarely as extensive or as obvious as in Thayer's. These differences are well illustrated in the following photos. 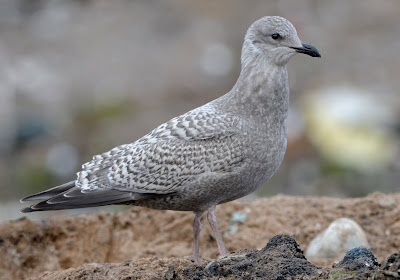 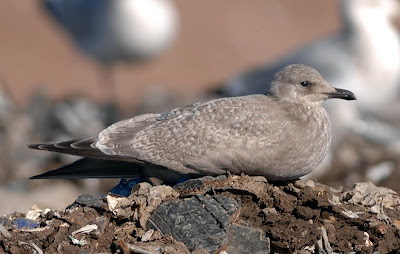 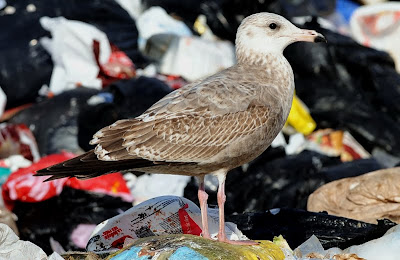 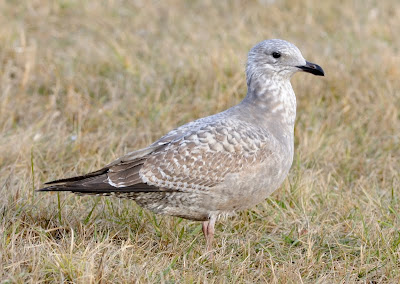 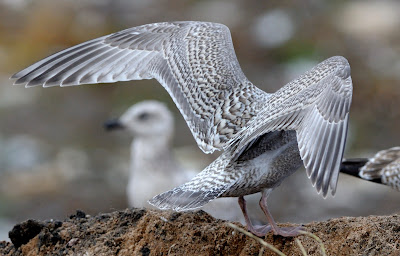 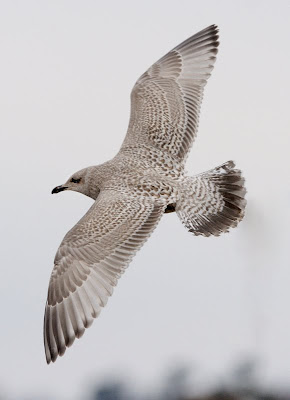 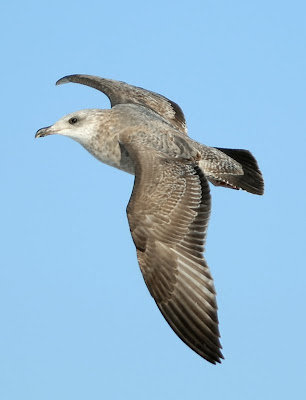 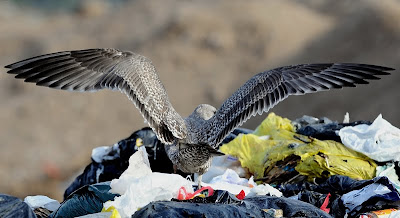 The underwing of the juvenile Thayer's Gull shows silvery white undersides to the primaries. This can be quite apparent but is very dependent on lighting. The Herring Gulls primaries can look very similar in a strong light or when backlit but tends to be more of a dull gray. 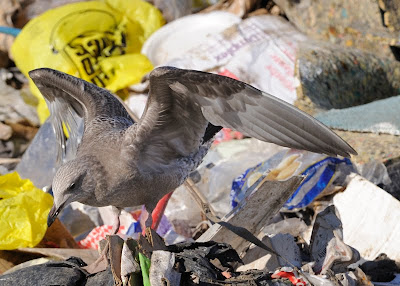 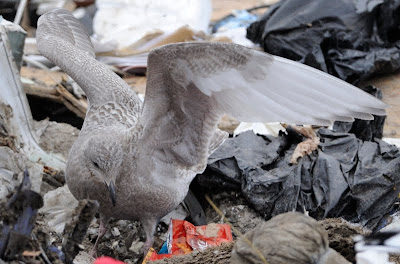 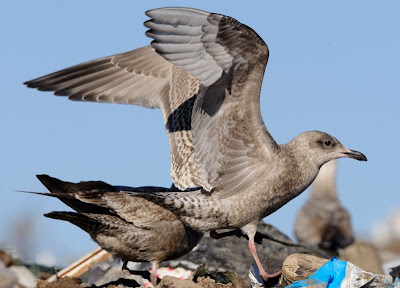 A couple of final thoughts. First there is a clear difference in the color tones between first year Thayer's and Herring at least in the fall. Thayer's consistently have a cold brown-gray coloration. Even the very dark birds have no warm tones. The first winter and to some degree the juvenile Herring's have lots of warmish brown tones. This is well illustrated in the following photo. 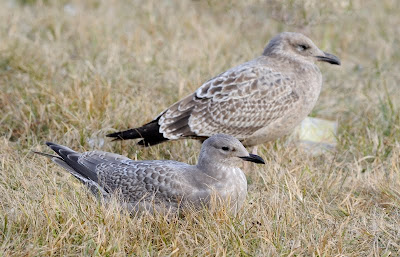 Lastly most of the Thayer's Gull have pretty worn looking scapulars by mid Oct. Most of the Herring Gulls molt there juvenile scapulars before they get as worn as you see in most of the fall Thayer's.  Almost all the juvenile Herrings I see are pretty crisp looking and I assume they must be born late in the season. If you look at the above & following picture you can see that there is always exceptions especially in gulls. 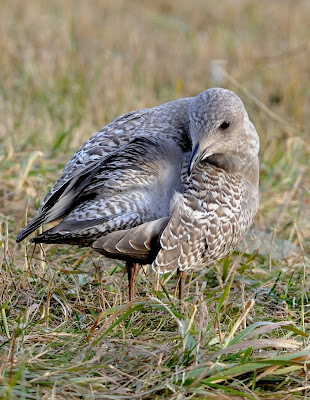 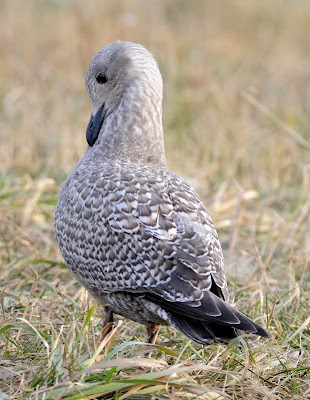 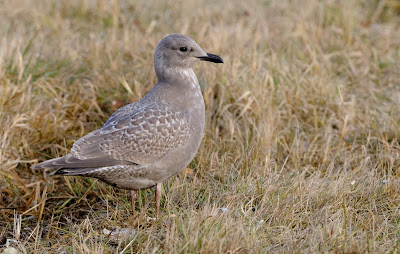 Following this are photos of a Thayer's Gull at the darker end of the spectrum. It illustrates the cold brown coloration, the relatively worn scapulars along with the reduced dark pigment on the primaries very well.  To me this is a "classic" Thayer's Gull. No mixing this one up with a Kumlien's. 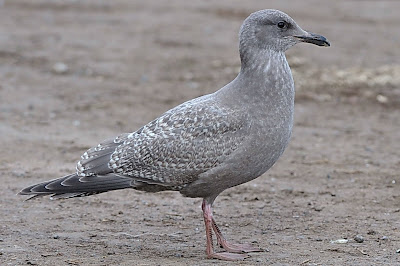 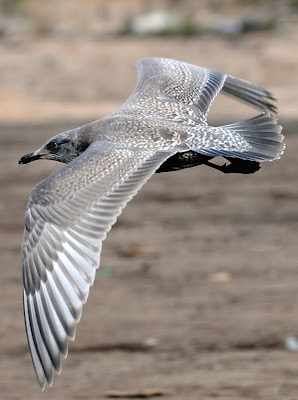 Two final pictures the first is a nice comparison of the primary patterns of Thayer's vs. Herring. The second is an especially nice look at the primaries in another "classic" Thayer's Gull. 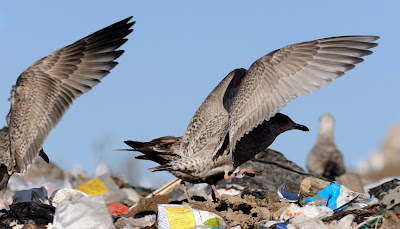 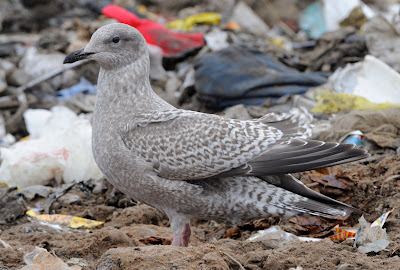 I think that about exhausts my insights into that topic. Thanks for checking out my blog and I hope you enjoyed the pictures. comments are certainly welcome.